Around one and a half year ago, I started a research about how computers synchronize their internal clocks, and how this could be used in order to attack well-known protocols and services running in Operating Systems. As a result, I have presented my findings in several security conferences such as BlackHat Europe 2014, RootedCON 2015 (Spanish), DEF CON 23 and Navaja Negra / ConectaCON 2015 (Spanish). 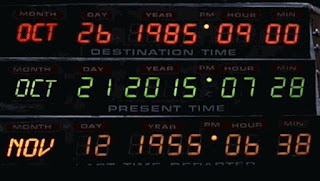 Today, October 21th 2015, it's the date when Marty McFly went to the future in the second part of the amazing Back to the Future saga, so I can't think in a better date to start releasing all the details about this research.
[1] NTP MitM Attack using a Delorean
[2] Mac OS X Time Synchronization
[3] Fedora / Ubuntu Time Synchronization
[4] Microsoft Time Synchronization
[5] Attacking HTTP Strict Transport Security
[6] Attacking the Public Key Infrastructure
[7] Other Attacks
[8] Helper tools

As we will see in the upcoming posts, all the OS vendors that I have tested use the Network Time Protocol (NTP) in order to keep their internal clock accurate, which is very important for some authentication protocols and other stuff. Most of them don't deploy this service in a secure way, making it vulnerable to Man-in-the-Middle attacks.
In order to exploit this issue, I developed a tool called DELOREAN. Delorean is an NTP server written in python, open source and available from GitHub (contributions are welcomed). I borrowed a few lines of code from kimifly's ntpserver and, of course, all the credits to him have been included.
What makes Delorean different and useful for us is that we can configure its flags in order to make it work in a different way than a regular NTP server. Basically, we can configure it in order to send fake responses, similar to the Metasploit's fakedns module.
$ ./delorean.py -h
Usage: delorean.py [options]

We can also set a specific date, and Delorean would answer always the same date:

There are an additional attack called "Skimming Attack" that is useful only on certain configurations, but we will go in depth with it when we will talk about Microsoft synchronization, despite it could be useful in other platforms.