Disclaimer: All this information has been obtained from empirical tests and in a specific period of time, so they could have changed.
Disclaimer (2): In this post I talk about certificates, SSL keys, etc. Please note that I could talk about (for example) "the certificates's private key" because it's the way I usually speak, but probably it isn't the most correct term. I should talk about "the private key of the certificate's public key", but I think it's easier to understand if we simplify this. Any way, if something sounds confusing, just drop me an email or comment and I'll try to clarify it.

From the number of attacks that I tried using Deloran, this was my favorite one. While I was thinking about what could go wrong when the clock can be tampered, SSL certificates expiration dates came to my mind. 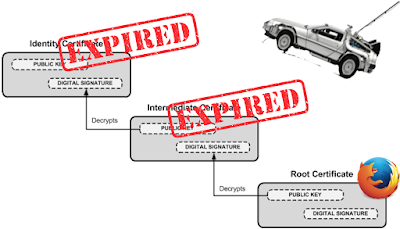 But we can't attack all the old certificates in the world using Delorean. We need to find certificates with the following conditions:
So... we said that we need to get old SSL host certificates. Where could I find them? Unfortunately, I did't grab SSL certificates 10 years ago, so I need to find somebody else in the Internet that did it. I spent a lot of time looking for this kind of database (the oldest the better, of course) and the better and oldest resource that I found was The SSL Observatory from EFF. They crawled the Internet in 2010 and stored a huge database with all the SSL certificates that they found. 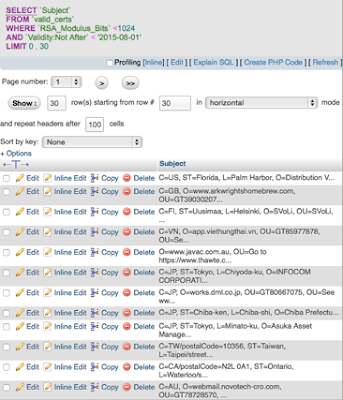 Now that we have an old SSL certificates database, we can start looking for certificates that we think we could break and get it's private key. For example, something that came to my mind was the FREAK attack. As a part of this attack, they cracked RSA-512 keys in a few hours, using a big Amazon EC2 cluster, so we could do something similar if we find RSA-512 certificates in our database.

Unfortunately, the most interesting targets (Google, Facebook, etc) didn't use RSA-512 in 2010. Maybe if we had an older database... Anyway, I was able to found some interesting certificates and some funny ones, such as a Disney site (not the main site).

I'm not going to specify step by step how I crack the RSA-512 certificate, because I would be a post (or some of them) itself, and because It was the fist time that I did it, so you can find much more useful information in the Internet [1][2][3][4]. At the end of the day, I had four EC2 machines running 3 days (as far as I remember) and It was around $150 in total. 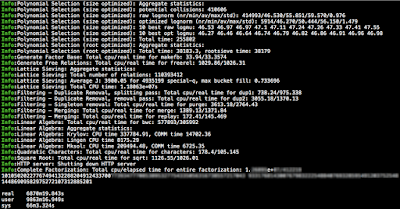 Once you have factored the old RSA key, you have the two prime numbers that were used to create the public and private keys, so you just need to do it again (private-from-pq.c) to get the private key. Let's see if it works or not.


It works! The certificate chain is valid again and we have the private key, so we can cheat the browser and impersonate the website. Cool!

As far as I have read (I'm not an expert in this field), Governments and other organizations with enough resources could crack RSA-1024 in a reasonable time. This is even more interesting than my demo, because RSA-512 is now banned from most modern browsers, so they would reject the certificate chain. I did this demo using an RSA-512 certificate because I don't have at this moment enough resources to crack RSA-1024 and because It's exactly the same process, so if we can do this for RSA-512 in a slightly old browser, we definitely could do it for RSA-1024 if we had enough cracking power.

This is not the only one old weakness that we can use:
But there's something that probably came to your mind. What about certificate revocation? This isn't a problem with cracked certificates, because they never were revoked, but hacked certificates, heartbleeded, debian prng, etc ... all those certificates should have been revoked after generating a new one. 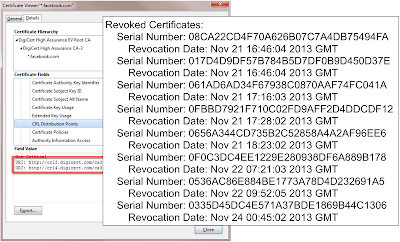 A Certificate Revocation List (CRL) is the database where all the revoked certificates are stored. Browsers download them (or request information via online services) and check if a given certificate is revoked or not, If it is, they reject the communication even if all the certificate chain is valid.

When I was facing this problem, the question that came to my mind was: Do those CRLs store ALL the revoked certificates? From the beginning of time? This would make this files HUGE, which is something that could affect performance. Well, I can't be 100% sure about this, but I did some quick tests to check if CAs purge their CRLs when revoked certificates are not valid because of their validity period. 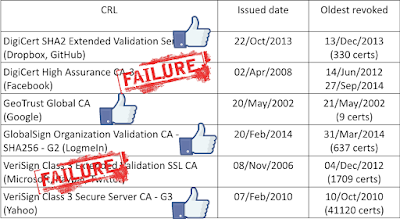 Online Certificate Status Protocol (OCSP) doesn't really help (it's even easier), because most browsers are configured in order to accept certificates if they can't validate them, so an attacker just needs to drop OCSP connections. More information HERE.

From the list above, I looked for certificates that were generated using the old Debian PRNG bug. The problem was that this happened in 2008 and the SSL database that we have is from 2010, so most interesting websites changed their certificates before 2010.

Looking around the Internet I found CodeFromThe70s. They developed a Firefox extension that detected certificated generated by the Debian PRNG bug. Detections were sent to them so they have a nice blacklist in their website. I used that list to find a certificate that I could use to test if it's still revoked or not.

Next step was to get the private key. This wasn't as fast as I thought, because the pre-generated list published by HD Moore was for SSH keys only, so I needed to generate my own for HTTPS. What I did was to use the original patched "getpid.so" library and "ubunturoot" chrooted environment (original link was broken, so I downloaded it from here), and I developed a couple of shell scripts that just generate all possible SSL key pairs and check if it's the one I'm looking for:

It took a few hours but I was able to get this private key as well. Maybe it wasn't the most efficient way, but it worked for me. The resulting demo is following:


My DEF CON talk (August 7th, 2015) is online, so you can have a look as well. I presented this as well in Spanish in RootedCON (March 2015) and NavajaNegra/ConectaCON (October 2015), but their haven't published the videos yet: